TEN CHAPTERS OF THE RESONANCE WILL BE POSTED OVER A 5 WEEK PERIOD. IF YOU HAVE MISSED ANY THEY WILL BE LISTED ON THE BLOG PAGE.

If people had evolved in the sea then why did no one know about it? Marty strolled along the cliff top and admired the evening light. The sun glowed red and illuminated the orange clouds on the horizon. He set his digital camera in anticipation for the perfect picture moment. Climbing onto a large, curvaceous rock, he opened Mermaids at Dawn. The book was a little crunchy where the remains of a squashed spider sat amongst the first pages. Before its death, that spider had kindly woven a web throughout the entire book and appeared to link the pages. Marty examined the remains of the spider, produced a pen from his pocket and scraped the small carcass off the page. He then wiped the remains on the grass. After checking the pen for remnants, he reminded himself never to put that particular pen in his mouth…

Later that evening, after struggling up the hill, the three frightened women stood reluctantly outside St. John’s church.

“No you go” said Doris

“You’re the oldest Doris – so you take the lead…” said Mawd, shoving her towards the carved, wooden door. As the door opened, an elongated urrrrchhh echoed through the still interior. Unenthusiastically, the women forced themselves to seek the priest’s reassurance. Each clung to each other’s clothing as they crept into the tiny church. Silence.

The church was warm inside. It smelt like incense and damp stone. Numerous butter-coloured candles flickered vibrantly in clusters. The golden glow revealed the distinct contrast of the dark shadows cast by the distorted wax forms. Evenly spaced, vacant pews, led towards the elevated altar where Jesus gazed down.

The kindly middle-aged priest, Father Driscoll MacDuff, entered the chapel from a side door. “I thought I heard something,” he said softly and paused.

The silence and fidgeting amongst the women was telling. What’s more, their eyes glistened. All but one appeared consumed by emotion: Megan looked empty, secretive and awkward.

“I’m sorry father!” said Mawd bursting into tears and sinking to her knees with her head bowed…

“Ladies, for what do I owe such a display of emotion?”

“We do ney want to burn father. We, all of us, have seen a creature from the deep with bright eyes,” Megan desperately blurted.

“You’ll be the death of us Megan!” said Doris striking Megan’s cheek. Smack!

Father Macduff was silent in consideration. “And did you have any physical contact with the creature?”

They shook their heads and glanced at each other.

Father Macduff paced towards the altar. With his hands behind his back, he sighed. “So they are returning. Change is coming.” He glanced up at the cross and shook his head. “Ladies the visitation was for a reason.”

“A message from the others… You will not burn for this. Although we must keep it quiet, we do ney want the villagers to panic,” he said turning to gauge each of the women’s reactions. Megan gazed at the priest, “What was the message father?”

“Someone has wronged them, which means there will be repercussions. Now keep the sighting amongst yourselves. Behind closed doors – yer hear?” said Father Macduff sternly.

The women nodded and stared at the floor.

“But shouldn’t it be remembered father?” asked Megan.

Father Macduff pondered, what was the best course of action? “Ladies, you should return home. It is late. Now I suggest you forget you ever saw the creature and carry on with your lives as normal. I will instigate the appropriate action.”

The group nodded and turned towards the door. Father Macduff watched Megan curiously, there was something…

The watching sensation travelled across Megan’s back, so she glanced back.

Her mother had burned eighteen years earlier. Father Macduff wondered whether the girl knew the true cause of her mother’s death. Was it a coincidence that Megan had witnessed the creature?

The sturdy grandfather clock in the corner made a series of chimes at ten o’clock. Megan sat in front of the fire and gazed out of the cottage window onto Straight Lane. The situation was unfair! How could creatures exist but no one was allowed to discuss them openly? Megan hated secrets. Her family was full of them. That was why she married as soon as she could, when she was just fifteen. She had taken on Cameron’s four boys and had lost one of her own. Unfortunately, the bairn had suffered a cot death the year before. “You are cursed for marrying the widower of a witch,” the villagers had taunted. It was true, Cameron’s wife burned for witchery only seven years before. In the meantime, Megan’s adopted family were at sea catching their livelihood. They could be away for days or even weeks, it all depended on the crop of the sea.

Megan wrung her hands and sighed. The village was full of secrets. She hated the village and its controlling ways. Thoughts clouded her mind until they formed a storm. Something had to change!

That niggling feeling in his gut bothered Father Driscoll Macduff as he sat in his study lit by a glow of candles. The heavy smell of dark wood and incense filled the room as he sketched. The scratching noise made by the quill on the thick parchment paper cut through the atmosphere. After a couple of attempts he paused, the image had to be as clear as possible; that way the church would know what they were dealing with. He gazed at the creature and felt his stomach knot. “With such beauty and purity why do you always bring a trail of death?” he whispered.

The piercing cold night air instantly seized Father Macduff’s breath and turned it to steam. Wearing his long black overcoat, he left the church and glanced at the bright stars in the clear night sky. The moon was bright when he mounted his bay horse. She nervously panted, sensing something in the father’s motion. The hastening of hoofs marked their entrance into a rhythmic canter. He intended to warn the nearby villages of Rosehearty and Banff.

On a hill overlooking Banff, his old friend answered the door wearing his nightclothes and a tired frown. Father Cullen carried an atmosphere of concern as he invited the sorrowful-looking Father Macduff inside his study. The interior of the cottage was stone with dark, wooden shelves full of dusty leather-bound books and candelabra with a multitude of candles. The pair took their seats by an open fire with only luminous coals remaining.

“So why visit so late?” asked Father Cullen.

Father Macduff unfurled the sketch and passed it to his friend. “She has visited us.”

“Be prepared for death then,” said Father Cullen sadly. “I wondered whether they would break the agreement. No doubt, the resonance has begun. We must inform the others. Aye… and advise the gravediggers to start digging. Death will be inevitable,” he said with a sigh. “In the meantime, I will inform the elders of the sighting and the agreement. We do ney want those outsiders finding out our secrets. Do we now?” he said as an afterthought.

That night news spread amongst the churches. Each priest visited one another carrying the message. Death was imminent!

Marty turned the page but a subtle resonation circled through the air. For a short while, he silently listened. It wasn’t the same sound as Iris had made; but it was similar and coming from the base of the cliff.

He dropped to his knees and crawled amongst the dewy moss. At the base of the cliff, he noticed three women gathering seaweed in the shallows. They had organic looking sacks where they piled handfuls of seaweed. All the while, a subtle but contented hum swirled through the air.

Crawling on his front, Marty followed a track down the cliff. As he did so, he dislodged some debris. For a moment, he held his breath and strained to keep his composure.

Once he had arrived at the base of the cliff, he sidestepped towards a rock. It barely covered him. At the same time, the lead women turned and motioned to the others.

The singing calmed and Marty laid low. He paused for a moment, was he mad? He was photographing three semi-naked women in the water. Did that make him a peeping Tom?

One woman splashed without using her hands. The others giggled.

With a frown, he peered at the back of his camera. He had two pictures left on his memory card and not enough time to delete. He watched in silence, another resonation came from far out to sea. As it drew closer, its intensity increased. The women emanated a response but chatted to each other in a different language, possibly an old Scottish language but one he couldn’t understand. It sounded like an old Scottish language. Some of the locals spoke in a dialect called Doric, was that what it was? Their expressions revealed gossip, which ceased when a man surfaced and gestured towards the horizon. The group followed his lead and silently submerged.

To follow the group’s trajectory, Marty tracked them using his zoom. The first woman surfaced and dived. A dark shape skimmed the surface of the water. The other two women followed. Click. Click.

With an astounded silence, Marty stared at the camera’s display. He had just witnessed something he could not define. No matter how much he zoomed in – it was not clear. He needed to see the image on a full-size screen, his computer screen. Maybe then, he could figure it out.

THE RESONANCE IS AVAILABLE ON AMAZON 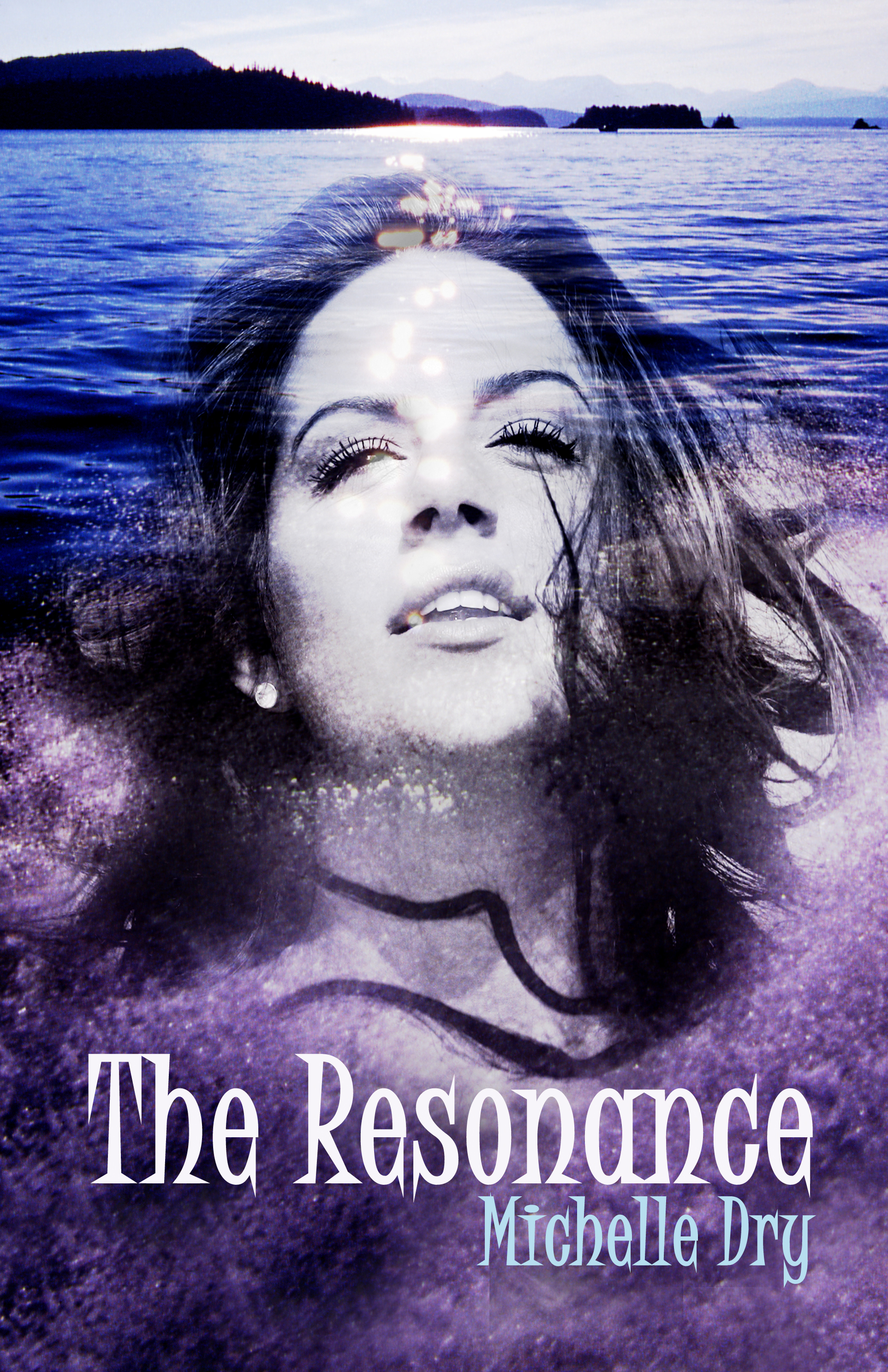