Over the next couple of weeks I am going to share some of the Tingle Dingle chapters. These books are aimed at the age five to seven year olds. I loved writing these and have so many fun little ideas for this series. Anyway I hope you will enjoy them as much as I loved writing them. 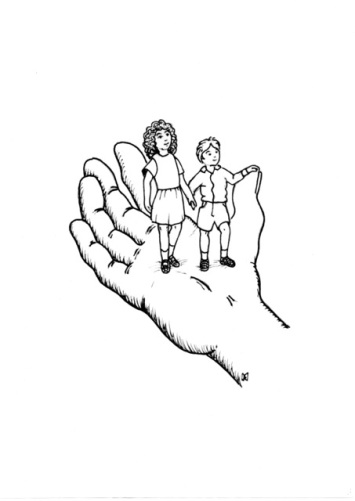 Gianty Giggles And Children Who Wriggle

Once Tingle and Josh were safely sitting in their seats, Auntie Joanna closed the door to her camper van. She checked her roof rack was safe and able to hold at least three giant vegetables. She glanced at Tingle’s mum and dad to make sure they were comfortable too and then took the driver’s seat.

‘Oh no,’ said Auntie Joanna, ‘I would never joke about giant stews made from giant pumpkins, giant parsnips and giant mushrooms. What is stranger is that the giants didn’t have giant bowls big enough to cook their stew, so had to cook it in metal baths.’ Auntie Joanna smirked at the thought of cooking a giant stew in a bath. ‘You know I just have to remember where we had to buy the giant vegetables from when we were little. I really hope that the farm still exists,’ she said thoughtfully. ‘Dianne do you remember where it was?’

Auntie Joanna turned the key in the ignition and set off in the direction of Somerset.

‘Wasn’t it something to do with washing?’ replied Dianne after some thought.

Auntie Joanne continued driving. ‘John do you have any idea?’

‘I am just searching for villages on Exmoor that have the word washing in them,’ he replied.

‘What is Exmoor?’ Josh clung to his dinosaurs, they had definitely gone to sleep. Not a roar to be heard.

‘Ah, Exmoor is a special place that is full of countryside. It is called a national park because it is protected. No towns or cities can be built on it. The national park is filled with trees and has plenty of grass to play on. People from all over the country visit the beautiful area because it is full of nature.’ Dianne replied.

‘Found it!’ John said in a tone of excitement. ‘There is a village called Washford and there are farms nearby.’

‘That sounds like it.’ Dianne said giving her husband a kiss on the cheek.

‘Is there a castle nearby?’ Auntie Joanna asked. ‘I remember a castle.’

John skimmed through the map and nodded. ‘Yep… we have a castle close by in Dunster.’

‘That has to be it.’ Auntie Joanna glanced in the van’s rear-view mirror. ‘Can you see if there is a giant vegetable farm?’

Tingle glanced at Josh, they had no idea how they had ended up searching for a giant vegetable farm.

‘Auntie Joanna, what do we do if we meet a giant?’ Tingle was concerned. What if Auntie Joanna made them meet a real giant?

‘Well that is a very good question Tingle. Obviously next to a giant you will be very small. So you have to make sure that they don’t step on you. The best way to get a giant’s attention is to giggle. For some reason they hear that better than anything else. Also if you say something funny and they laugh then they really like you. They also like anything that rhymes. I remember a time when your mum, when she was a little girl, said a special rhyme to the giant. That was how we were allowed to see the treasure tree.’

‘Oh I had forgotten that,’ said Dianne. ‘Gosh meeting that giant with Nana was a long time ago now.’

‘Do you remember the rhyme?’ Auntie Joanna said with a huge smile.

‘Can you believe it has just popped into my head?’ Tingle’s mother sounded rather shocked.

‘Are you ready? Gianty giggles and gianty laugh, we’ve bought you some vegetables to cook in the bath.

The pumpkin is big, the parsnip is too, mix with the mushrooms to make a nice stew.

We truly hope you like what you see, as we’ve come to visit the treasure tree.

Please grant us safe passage to the tree full of treasure, as this we’ll remember for ever and ever.’

Dianne gave a little bow from her seat.

John clapped and Tingle and Josh joined in.

‘I can’t believe I remembered the rhyme’ said Dianne excitedly. ‘Tingle this reminds me of when I was a little girl like you.’

‘Look only five miles to Washford and then we can buy some giant vegetables to give to the giants.’ Auntie Joanna slowed the camper van.

‘Oh the road is going to get very wiggly kids. You are going to have to hold on.’ Auntie Joanna was excited as she beeped her horn when they came to the first bend. Tingle glanced at Josh and held on as the camper cornered the bend.

‘This is exciting!’ Josh whispered to Tingle.

Tingle didn’t want to admit it but she felt a little bit scared about meeting giants.

LINK TO TINGLE DINGLE AND THE TREASURE TREE ON AMAZON.COM

LINK TO TINGLE DINGLE AND THE TREASURE TREE ON AMAZON.CO.UK