Have you ever considered rocks? You may have – I know it is a rather random question. Have you ever considered how quiet rocks are? Now take those rocks and place them on a lovely patch of moss – that moss is all bouncey too and equally as queit. Now the positioning of the rocks is paramount. That specific rock alignment inspires the observer and takes them into a state of calm and tranquility. That is the purpose of the rock garden that I visited in Kyoto, Japan, today. 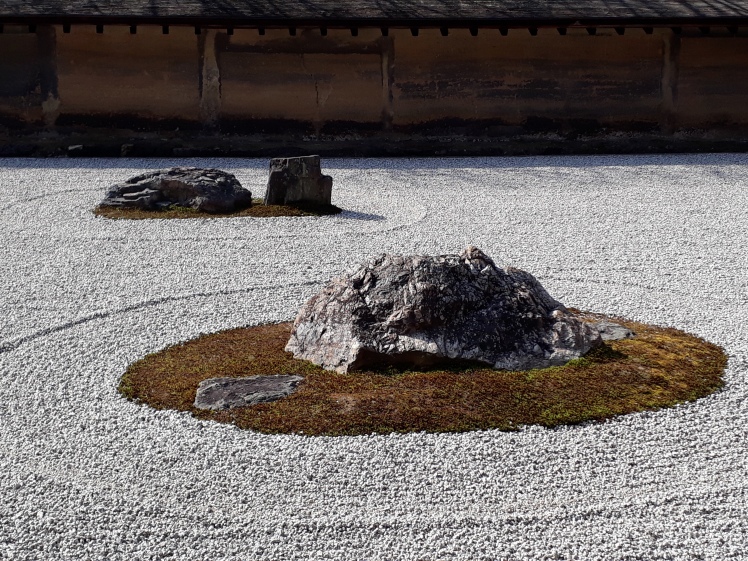 Now you may think I am having a laugh. I am not and what makes it stranger is that I have been looking forward to going somewhere that inspires peace. A place that is filled with quiet… Yes quiet can fill a space. Noise does not need to be present. When I put it like this it amuses me: I wanted to fly across the world so I could stare at an arrangement of rocks to feel at peace. Imagine explaining that to someone. Well I learned that I am so naiive. I even attempted to get to the rocky contemplation location really early in hope I could have those quiet moss loving rocks to my self. Oh how silly I was…

So my question is why would you visit a place and make loads of noise? It is like going to a place were fasting is the focus and waving a huge cake. The situation that unfolded in the peaceful rock garden was as if the divine had stepped in and said… ‘I will show you peace by sending ten buses of international tourists who will jostle with each other to photograph a rock.’ It is amazing what conflict can come from rock photography. Each fought each other for the perfect peaceful rock position to take the picture. Some fell over the chordoned off areas. Others walked with their shoes over sacred areas to be without shoes. I sat and watched the show. Were any at peace? Did any sit and feel the tranquil state offered by a beautiful rock? Nope, they were determined to get a picture to show others a peaceful rock.

So where is this all going? Well it made me think about peace. Peace being the inner state and how certain objects promote peace. Now I will be honest, that rock garden was just lovely. The arrangement of rocks, the space and the lichen simply inspired. Although that inspiration was shattered by the tourist invasion. I would be like going to a meditation class and a brass band strolling through at the moment people descended into self.  Admittedly the irony is amusing; however, the reality is disturbing. All these beautiful places of peace are being invaded by throngs of tourists. Of course it is inevitable in a world which is so accessible. Yet so many people feel stress, most illnesses are associated with stress and so few people realise how to connect with tranquility and peace. Instead they are trying to take a blooming selfie next to it… Ha… Apologies, I am laughing to myself – actually it is more of a chortle. It is a peaceful chortle! 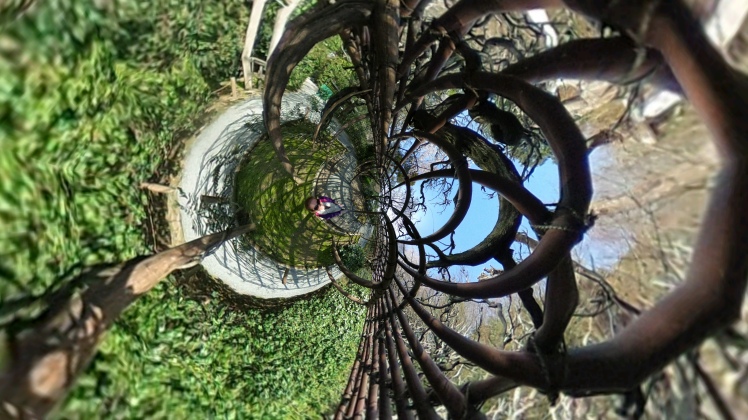 Soooo, with the rocks in mind and their lovely sense of quiet, I contemplated on peace. What is it that brings me to peace. For me it is meditation, silence, nature and choosing to step into that state. Meditation takes me into that suspended state of self where I float inside and am. My mind switches off and all is empty like one is floating in space. I love it. The rocks triggered the no thought. One could just gaze upon a silent rock and observe the shape. That shape would take you to the state of no thought. That was why the arrangement was so precise and so profound. I wondered how many of the urgent chatters would have considered that? Ultimately it did not matter because they were hurried off by their tour guides once they had a nice photo of a rock.