The scooter phenomenon demonstrates the evolution of humanity. When I talk about scooters I am not talking about those fun children’s scooters. Instead, I am referring to those tank-like devices that have replaced electric wheelchairs. They are the ones that have baskets and can be used to transport all manner of human form over quite a variety of terrain. 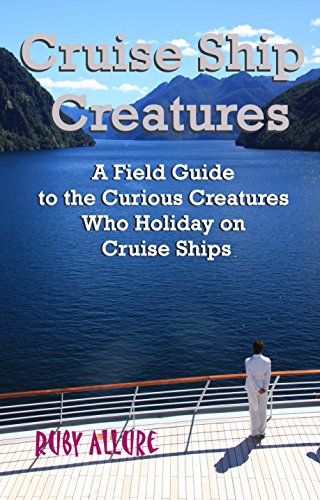 When I first returned to ships I was astounded by the number of people who transported themselves on scooters. When it came to life boat drill there was a moment when all the souped-up scooter drivers would arrive at once at the muster station. It was like watching a wall of old Hell’s Angels descending on the theatre. It was quite a fearsome sight. A wall of old people, huge people and random people all on scooters driving at one door as though it was a race was terrifying. For some reason I thought there might be a rules of the scooter road. I was wrong. Scooters don’t seem to follow any rules, instead it is a free for all and every scooter for themselves. In fact, I had to ask them to park nicely as a couple began ramming each other or nudging the others. Times have changed with scooters; at one time people didn’t take them seriously. Suddenly the scooter phenomenon came into vogue. There are all manner of scooter to choose from. In the mature age bracket some carry a sense of kudos by individualising their scooters. I have seen golden flames on the sides and scooters adapted to the mods and rockers styling with numerous mirrors. Maybe that is the way forward, backward and down the stairs. As long as the scooter has bling then it doesn’t matter how it is driven.

Some of the strangest scooter moments have included watching a lady reverse out of a lift. After colliding with the door a number of times and watching the door almost close on her, I was about to offer her help but she gave me a certain look that said ‘I am doing this!’ This is when I learned that many scooter drivers really don’t want help. Sometimes when you offer they shout ‘I can do it myself!’ It was as I was about to ask her if she needed assistance that she suddenly figured the angle out, put her scooter on full reverse throttle and charged backwards down the stairs. She hit the wall, rebounded and went forwards down the next set of stairs. When she arrived on the landing she continued to her destination as though she had planned the manoeuvre. My concern is that as she gains scooter power she will start ram-raiding.

Another example of the extreme scootering caught my attention by the gangway. Ever thought you would witness two people playing chicken on a scooter? Well it seems that once a person gets their super scooter, then they are going to rule the scootering world! They come first and everyone has to respond to them or get out of their way. Their scooter antics make them a scooter of power! This may work for one person but when a few people adopt this scooty attitude then that is when things become dangerous. When I say dangerous we are talking potential carnage. So imagine this: two souped-up scooters both with drivers carrying the same kamikaze attitude. One scooter had flags and streamers while the

other was blinged up with gold: gold mirrors, gold plating – gold everything. Both intended to get to the gangway before the other. Both came from opposite directions. Both saw each other and revved their throttles to full speed. An expression of determination combined with flatulence appeared on both of their faces. The old dear had long white hair trailing down her back and the bald old chap wore goggles like those worn by fighter pilots in the 1940s. As the pair gained speed people jumped out of the way while both scooter maniacs put their heads down and focused. It was as though they were involved in some kind of speedway, and guess what happened? It was immaculate because neither was going to beat the other and neither was going to give in. So what happened? They reached the gangway at the same precise moment and collided with each other. ‘Boom!’ One was thrown from the scooter and the other thrown over the handlebars which kept the throttle moving, pushed the other scooter out of the way and directed her down the corridor. The entire atrium stood in silence and then the miracle happened, the gold scooter driver stood up, got back on his scooter and drove down the gang way a grin. ‘I won,’ he muttered.

There was also the phantom scooter menace. She had arrived at a point in her life where she simply did not care. She carried a bottle of whisky and drunkenly drove the scooter. Yep drunk and in control of a scooting device. She drove over people’s feet and then drove at people. At first she got away with it but then she met a new friend and the pair became extreme. Her new friend was in a wheelchair and what she would do was drive past, he would grab onto the back of her scooter and she would go to full throttle with him clinging on screaming with delight. In one of the ports the pair managed to find a duck sounding hooter. So not only did the pair drive around the ship at full speed quacking, they became menaces to the other guests. There were times when the pair set up ambushes to drive out of random areas at unsuspecting guests. In the end the pair were pulled in and advised they would be disembarked if their behaviour continued. The duck quacking scooter driver sobbed apologetically but on the final day of her cruise she was back to her drunken scooter driving antics. She had one day left and she was going to give it some erratic driving welly!