Tingle Dingle and The Curse of The Splishy Sploshies – CHAPTER 4 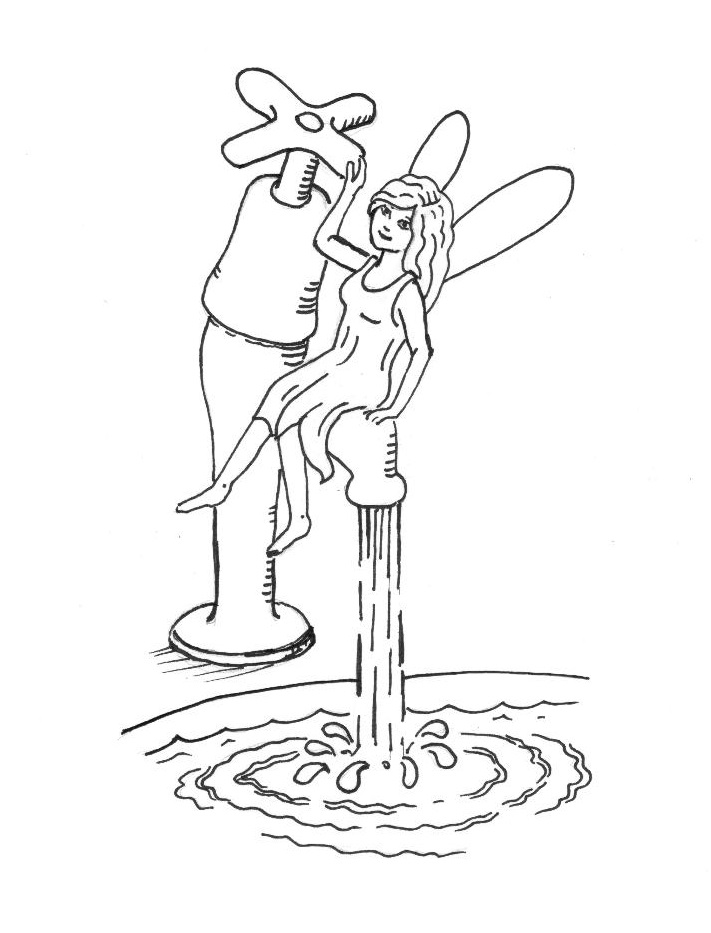 Sometimes a person’s face can reveal bewilderment, shock, tiredness and confusion all at once. In fact it wasn’t really all at once, instead it was a series of very fast expressions that overlapped. When Tingle and Josh’s dad stepped onto the patio and watched his children and wife being flung up and down the garden on what appeared to be a huge wave machine, he wondered whether he was still dreaming. After working nights he sometimes found it very hard to wake up and had those strange dreams where he dreamt he was awake but was actually still dreaming. Half of him hoped that was the case, but after pressing all his fingers against each other, he realised that the odd sight before him was real. His children were riding inflatable unicorns and flamingos up and down the garden on huge waves. They were gleefully howling as his wife followed on bounding waves. She was casually sitting in an inflatable ring doughnut decorated with icing and sprinkles. How could he explain that to anyone?
‘Look there’s dad,’ shrilled Tingle as she bounced along clinging to the neck of her inflatable unicorn.

‘Darling we’re having so much fun! It’s like going to a water park,’ his wife cried as the doughnut bounced past on the crest of a wave. The Splishy Sploshies continued to sing and dance. The dancing ducks formed a lovely line and did a duck Doh-si-doh.
‘Erm…’ he said peering down at the formation duck dance. ‘What should I…’
‘Join in!’ Josh shrilled as he raced past clinging to his huge pink inflatable flamingo.
Tingle’s dad sighed, what could he do? He had no clue what was going on but it did look fun!
‘Okay,’ he said with a chuckle. With that, a large watery hand picked him up, created a magical life jacket and swept him up into the inflatable paddling pool. It reminded him of holidays and bouncing along on a big banana being pulled by a speedboat.
‘Have you had breakfast?’ Tingle’s mum cried.
‘I was just about to…’ He replied.
‘I have snacks!’ Tingle’s mum called.
At that precise moment, when the doughnut and paddling pool hurtled past each other, she threw a protein bar in his direction. Tingle’s dad caught it and glanced down the garden. He had never considered eating whilst hurtling along in a paddling pool on a random set of waves washing up and down his garden. What’s more, all the water sprites danced and sang around him. It was like being part of an extremely watery magical musical.
‘Erm darling has Jo got something to do with this?’ he asked.
Tingle rode past on the inflatable unicorn. ‘Kind of… We think you flushed the toilet too many times. These are the Splishy Sploshies and they create water mischief. It started with them flooding the bathroom and rising from the toilet. They were even in the fish tank!’ Tingle cried.
Tingle’s dad didn’t quite know what to say. ‘Oh,’ he replied. ‘I should have guessed.’ After a short pause he drew parallel with his wife. ‘Erm darling, how are we going to sort this out?’
‘Jo is coming over a bit later, so we thought that we would have a play before we went to the source of the issue. They will just keep coming unless we go to see them in person.’ Dianne said as though she made perfect sense. ‘It means we will probably be going on a bit of an adventure though. I hope that is okay for you?’

Tingle’s dad frowned as he tried to make sense of what she said. At the same time he gathered speed and rode down the face of a large wave created especially for him. He clung to the inflatable and began to laugh. ‘Darling, what happens if we fall in?’
‘Oh I just did that. They scoop you up and put you back in the inflatable. I was concerned at first, yet they were clever enough to make us magical life jackets. They don’t want to hurt us, they just want us to play!’ Dianne replied.
‘So why aren’t you wet?’ Tingle’s dad asked.
‘Magic darling, they just remove the water from your clothes… If you ask nicely.’ Dianne said gaining speed down a wave.
‘How long will we be doing this?’ Tingle’s dad asked.
‘Either until they get bored or Jo gets here.’ Tingle’s mum replied.
‘I’m here,’ said Auntie Joanna as she stepped through the gate.
‘You’re early!’ Tingle’s mum cried with relief.
‘I told work we have a family emergency. I managed to rearrange two clients and one of the other therapists covered the other one that I could not rearrange. I told them I will make it up to them once we have sorted out a major flood,’ she said placing her bag on one of the seats on the decking.
‘Were they okay with that?’ Dianne asked.
‘Yes, they know that I will only cancel if there is a real emergency and I always make up the time.’ She paused for a moment to take in the phenomenal sight before her. Splishy Sploshies were dancing and singing. A full wave pool with proper surf waves tumbled through the garden. Her sister, and her brother-in-law, along with her niece and nephew were riding along on giant inflatables. It wasn’t your average day! With a huge smile she watched some of the Splishy Sploshies spiral towards her. ‘Helloooooo!’ they cried when they recognised her. ‘Will you play too?’
‘A surfboard please,’ she replied with a nod and a grin.
A moment later a surfboard appeared on the surface of the water and a magical life jacket surrounded Auntie Joanna who launched herself onto the board, paddled for a wave, flipped to standing and carved the surf. ‘Shall we have a little play and then call it a day?’ She said in a tone that Tingle’s mum knew. There was no way that Auntie Joanna was going to miss out on a full garden water play park and wave machine.
‘I think I would like to get off now,’ said Tingle’s dad. With that his wave directed him to the patio and placed him elegantly by the door of the house. ‘Oh, they can just stop it like that?’ he said with a tone of surprise.
‘Yes,’ said Tingle’s mum. ‘We can play as long as we like. If we stop they just keep going. We had a bit of a break and a snack about an hour ago.’
‘Oh, I will go and have some toast and come back out when my food has gone down,’ he said rubbing his rumbling stomach.
‘Darling, I think we will have to go to the source shortly. So you have to make the most of this while you can…’ Dianne called after him.

John nodded in agreement. Toast, rest and then one more inflatable playtime before the watery mayhem had to calm down. As much as he liked having a wave machine in the back garden, the neighbours might find it a little odd. He imagined them looking out of the window to see a whole host of water nymphs swimming, singing and splashing while his children rode inflatable unicorns and flamingos. The prize picture was his wife surfing a large iced doughnut. There had been a few curious glances from the neighbours because Auntie Joanna’s campervan was quite a spectacle with its floral pattern and bright colours. So if any of their neighbours glanced over the fence at that moment then no doubt they would fall into shock. Most would not know what to do with a Splishy Sploshy if it gave a little splash in their direction!
‘I am just going to get some toast. Does anyone want some?’ Tingle’s father called.
‘No thank you dad,’ Tingle and Josh replied.
He paused by the door and glanced at his wife who was at the pinnacle of a wave. ‘Erm darling are the neighbours on holiday?’ he asked.
‘Yes I think the left side are. The others went shopping, I think. Don’t worry this will all be gone before they return. I think the Splishy Sploshies may have even figured out that the neighbours were away so we could have this water park fun!’ Dianne replied.
It seemed the Splishy Sploshies had a strategy and whatever the next move was would be bigger and better and increasingly watery destructive.

BUY TINGLE DINGLE AND THE SPLISHY SPLOSHIES ON AMAZON.CO.UK HERE

BUY TINGLE DINGLE AND THE SPLISHY SPLOSHIES ON AMAZON.COM HERE