NO TURNING BACK AND A MYSTERY MONSTER DANCE TRACK

With a deep breath George cleared his throat. ‘Right we are doing this! Let’s doooooo it!’

‘What happens if anything goes wrong?’ Asked Jenny in a small voice filled with tremble.

‘We all run in different directions and meet back at the stump where we hid the costume. We can all hide in there together,’ Ben replied.

‘What if it goes really wrong?’ Jenny asked ‘Did you leave letters for your parents?’

Tabitha and George hadn’t and nor had Ben. It seemed that only Jenny had been thoughtful enough to leave a letter under her pillow to inform her parents that if Ben and Jenny were not in their beds then they had been eaten by monsters.

‘We’re distracting,’ said George. ‘We have thirty seconds to get there. Right ready… Go!’ 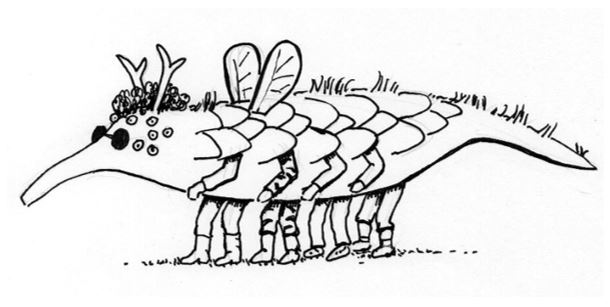 The group marched the monster outfit along the last part of the path and came to a decorated gate covered in lights. Three mighty-monster-security monsterered the gate and collected the tickets. George queued up behind a monster family who were there to watch the dance. They all had hair that flowed from the tops of their heads to the ground. They looked like walking wigs. Jenny peered out of her armhole. She could see crowds of monsters all making their way to stands full of seats overlooking the Monster Pit. It was like watching a stadium fill up for a music concert.

‘They are real,’ she whispered. There was no way all those creatures were people in fancy dress. There were all kinds of monsters everywhere and there were so many different types of monster. Ben was silent as he moved the tail aside and glanced backwards out of the monster’s bottom hole. It seemed the group had arrived at the right time because a queue of monsters had formed behind them. They all seemed happy and excited.

George was next in the line and handed over the ticket. There was silence as the ticket collector glanced at the ticket and then at the monster standing before it. After an awkward pause, it gestured for one of George’s hands and stamped it with a monster stamp.

‘Thank you,’ said George in his best monster voice. ‘Erm how do we make a late dance entry?’ he asked.

‘The table beside the pit.’ The monster replied.

That monster had a wolf head, large fangs and jowls that dripped slime. It gestured with one of its huge claws to a table with two official looking monsters. Both were bald, had five eyes, small noses and mouths full of teeth.

The security monster studied the odd looking creature in front of it with a frown. It wasn’t often a monster turned up wearing sunglasses and a wig. It sniffed the air and paused.

‘Thank you,’ said George. ‘Do we just go over and fill out a sheet?’ 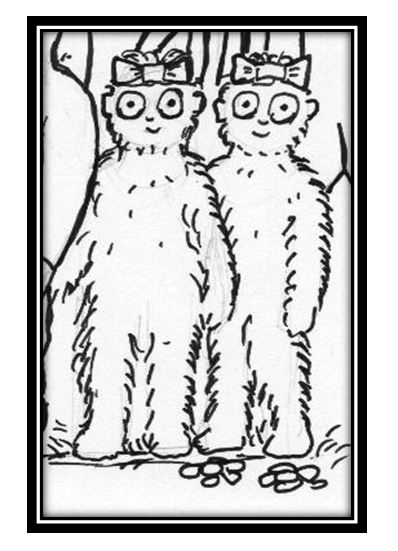 ‘They will do it all for you,’ the ticket collecting security monster replied and sniffed again.

Ben noticed the monster sniffing and grew concerned. Did canine monsters sniff each other’s bottoms the same way as dogs did? If that was the case then he could be in trouble and would most likely be the first to be eaten.

George took a deep breath. ‘Thank you, I will go there now,’ he said. ‘Right…’

The group took that as George telling them that they were going to walk and realised when he said ‘Right’ it meant that they had to take a step with their right foot.

When the group arrived at the late entry table Jenny and Tabitha froze. The two monsters, who were taking the late entries, were like nothing they had ever seen before.

‘Hello, we would like to make a late entry,’ said George in his best monster voice.

‘Certainly,’ said the first monster in the most delicate feminine voice. Even though she had five eyes, she sounded very gentle and had very long eyelashes which she fluttered when she talked. ‘And what is the name?’ She asked.

‘And the name of the dance?’ she asked filling out the form.

George paused as he tried to remember – ‘Erm yes…It is an A-Mystery Monster Rumble Tumble dance.’

‘How long is the duration of the dance?’ She asked.

Well that puzzled him. ‘Erm…’

‘Sorry?’ The monster glanced up from her form.

‘Okay you will be the last to go on stage. We expect you to dance at eight forty-five before the final dance judgements will be made by nine and the full dance party from nine-thirty until the early hours.’

‘That is our final entry,’ muttered the other five eyed monster. ‘There is no more room!’

The delicate voiced five-eyed monster added the entry to the pile and beamed a huge smile. ‘So if you would like to head over to the contestant area, which is beside the stage. There are seats and refreshments. We will just add you to the Monster Dance Board and you will be called in order.

With that he led the group to the contestant area. As the group walked away they could hear the two late entry monsters chatting. ‘So we have two late entries and they are both outsiders. Have you ever heard of A-Mystery before?’

The five-eyed monster pair glanced over at A-Mystery. ‘Well he certainly is a mystery. Let’s hope he can dance because this is a monstrous crowd and they will go ballistic if he is rubbish. Remember last year when the audience stormed the pit?’

The group found four seats next to each other in the contestant area and sat down. The costume was doing well.

‘Did you hear that?’ asked Jenny. 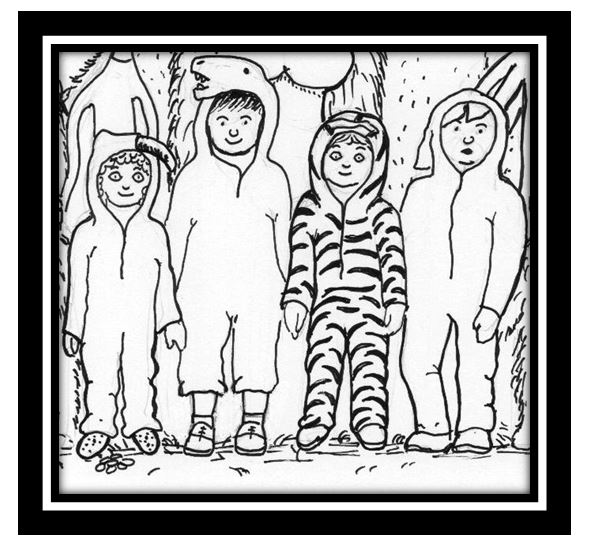 ‘Well we just have to dance well,’ said George, very aware he was a rubbish dancer.

‘I have my new lucky dance shoes,’ Jenny said helpfully.

‘We will dance well,’ said Ben. ‘We just have to make sure we dance in time.’

‘Talking of dancing they have a monster DJ and a band. Should we give them the music?’ asked George.

‘I think we just play the music on the phone through their speakers,’ said Ben. ‘I had no idea how much technology monsters had. I thought they would all be like wild people.’

‘It just goes to show how little we know about monsters,’ whispered Tabitha. ‘Until now we didn’t even think they existed.’

Their chatter was broken when a monster carrying refreshments came over. The bizarre creature looked like a series of entwined branches with numerous branchy arms. ‘Hello, would you like a nice refreshing slime juice?’ he asked offering George a cup filled with gloop.

‘What flavour is the slime?’ asked George in his best serious monster’s voice.

‘Well we have moss slime or elder flavour slime. Green or yellow?’ the branchy creature asked.

‘May I have one of each to see which is most refreshing?’ George replied.

‘Certainly… I think they are about to begin. Good luck!’ With that the woody monster made its way over to the other monsters.

George sniffed the gloop, it smelled nice enough but there was no way he was going to taste it because for all he knew it could have been flavoured monster snot.

‘Would all monsters take their seats as the competition is about to begin,’ came a monstery announcement over the speakers.

Monster families took their seats and what made the arena most interesting was that there were all kinds of monsters covering so many different age ranges. Tabitha peered from the armhole beneath her silky scale. She couldn’t believe it, she had no idea there were so many monster kinds and they all lived in the forest.

‘What are you thinking?’ whispered Jenny.

‘I would never have believed it if I hadn’t seen it with my own eyes,’ she replied.

‘Nor would I…’ whispered Jenny. She now had butterflies in her stomach.

‘Monster Ladies and Monster Gentleman welcome to this year’s Monsters’ Dance brought to you by The Ministry of Monster Motion. This evening we have some well-known competitors and a couple of late entries…. Wooooo! And one of them is a complete mystery. In fact he is called A-Mystery with his A-Mystery Monster Rumble Tumble dance… We should all be very excited. Are we excited?’

There was a roar from the crowd.

‘I said ARE WE EXCITED?’

A tremendous roar from the audience filled the pit like the sound a huge football crowd cheer when a goal is scored. The enormity of the mass roar turned Jenny rigid. She nuzzled into her friend for comfort. ‘Tabitha, I am quite frightened,’ she whispered.

‘So am I… Put on your dancing shoes,’ said Tabitha calmly. ‘And… focus on them. That will make everything all sparkly and nice,’ Tabitha squeezed her friend’s arm.

CLICK HERE FOR THE LINK TO MONSTERS’ DANCE ON AMAZON.CO.UK

CLICK HERE FOR THE LINK TO MONSTERS’ DANCE ON AMAZON.COM